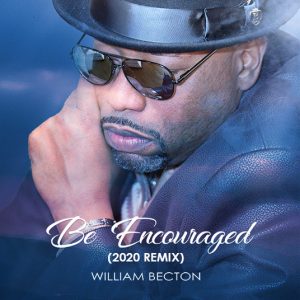 This year marks the 25th anniversary of the epic hit song “Be Encouraged” by two-time Stellar Award-winning producer and artist William Becton.  Becton marked this milestone and honored Black Music Month by releasing a new soulful version “Be Encouraged 2020 Remix”.  The long-awaited remixed masterpiece brings a fresh new sound to one of the most successful Urban crossover songs of our time.

In the remix, Becton adds the phrase “Keep Breathing” to encourage listeners through the current Covid-19 pandemic and to lift a voice of support during the rise of racial injustice and social unrest in this country today.

Becton is now making the official lyric video available for “Be Encouraged 2020 Remix”.  Creatively designed by Cameron Hilson of Propeller Media Group, the lyric video is a visual tapestry of the current state of the world along with images and video of Becton active in his calling of ministry.

This lyric video isn’t just a promotional tool, rather, it’s another vehicle for delivering a poignant song that has stood the test of time and remained a significant component in music history.  It visualizes a powerful anthem of faith that has crossed multiple genres of music and touched millions of people worldwide.  Becton’s much-needed message to the world today is the same as it was in 1995 and it echoes even stronger – “no matter what’s going on, He’ll make it alright. But you gotta stay strong…Be Encouraged!”