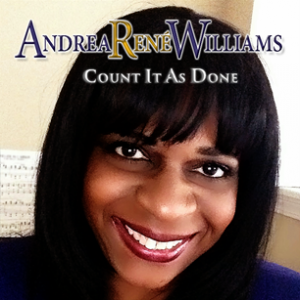 Andrea René Williams has seen how the power of music can change people’s lives. Whether it was in her 8-year role as Project Manager at the D.C. Chapter of the Recording Academy, also known as the GRAMMY Awards, or during her time as a publicist representing artists like Pastor Charles Jenkins, Gladys Knight or the late Andraé Crouch, she’s had opportunities to stand backstage and see how music can inspire audiences through those she’s been honored to represent. Now an artist herself, she is uplifting believers with a song she wrote entitled “Count It As Done”. A track touting the power of faith, “Count It As Done” has a brand new lyric video that just debuted on YouTube.

“‘Count It As Done’ was a song that came to me in two separate dreams,” says the song’s composer, arranger, producer and engineer. “The message and the music are so powerful to me. I don’t believe we realize what power we’ve been given as believers. Even in the climate of this current COVID-19 pandemic, we can use the word of God to speak healing and restoration over this nation and this world. We need to use the authority that the Lord gave us in Matthew 11:23 and speak to the mountains in our lives. We need to exercise our faith.”

Andrea is thrilled about the responses she’s been receiving from industry insiders. Words like “Wow!” and “I didn’t know you could sing” have been quite humbling for the artist. She’s even more excited when she hears people have been touched by the unique and captivating song. Williams says, “I knew the song was different when I heard it, but I had no idea that people would enjoy it so much”. The D.C. area is appreciating the track as well. The song recently garnered an award nomination for the artist. Andrea René Williams received two 2020 WAMMIE Award Nominations: one for Best Gospel Artist and one for Best Gospel Song for “Count It As Done”. Recognizing multi-genre talent in the Washington, DC area, the WAMMIE Awards has been an institution in the Nation’s Capital for decades. Due to the current COVID-19 pandemic, the award ceremony has been temporarily postponed.

Author of Live The Life You Sing About: How To Live With Integrity In The Gospel & Christian Music Industry, Williams has released two additional singles on her Angels Wings Records label and from her Gotta Praise production company, instrumentals “Won’t Work” and “I Still Believe”. Her music is available on major digital music platforms.